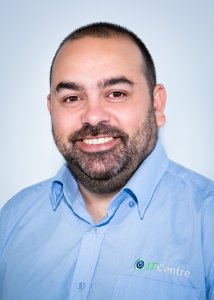 Zane is originally from NZ where he trained and completed a level 4 National Certificate in computers and web design.
He started his IT carrier on the Telecom Xtra Helpdesk (SPARK) then he migrated to Sydney and continued to work in IT as a supervisor on the Telstra Bigpond Helpdesk.
Zane has over 20+ years in the IT industry working for large companies such as American Express, Toshiba and Secure Agility with many roles like Systems Specialist and IT Consultant.

In 2018 Zane finally returned to New Zealand with his wife Vien and joined the IT Centre Team.
They have together chosen Wanaka to be their home where they can raise their three kids who attend MAC and Wanaka Primary school.
Zane enjoys cooking, martial arts, online gaming and exploring the outdoors.

Back to Our Team